A slight rewind...the flight from McMurdo to the South Pole 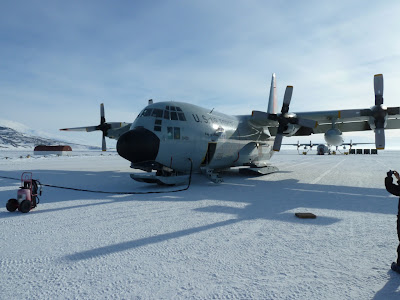 Out of McMurdo we fly south in an LC-130 (Hercules transport plane equipped with skis to land at the Pole). They're operated by the New York Air National Guard, and are a rather friendly and laid back group (compared to the Air Force folks flying the C-17s).

We boarded the plane, took off, and almost immediately turned around and landed again. There was a failure in the bleed air system which takes engine air and ducts it into the plane for, among other things, a deicing system on the leading edges of the wing. It was that part of the system which had failed.

There were DVs (Distinguished Visitors) on the flight though, so the ground crews scrambled, offloaded all of the cargo, and we got another plane. The DVs were taken back to town for food, but the rest of us were dumped on the runway to wait for ninety minutes or so for the new plane to be ready. These DVs made up a Presidential Blue Ribbon panel looking at US facilities in Antarctica.
at 9:10 PM